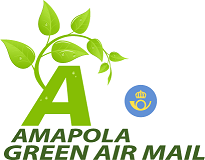 In Amapola we take the climate responsibility seriously and we have implemented a robust quality policy which is both effective and cost efficient, and by operating the business according to ISO14001 we have a continuing process.

The business shall be characterized by a proactive and persistent environmental work and should be seen as an ongoing process of improvement.

The company shall apply modern and energy efficient technologies where possible. The ambition is that any renewal of technical equipment will lead to more environmentally friendly operation.

The business must be conducted so that opportunities and risks are considered also from an environmental perspective.

Airlines flying in and out of the EU now record how much carbon dioxide they emit following aviation’s entry in January 2012 into the EU Emissions Trading System (EU ETS) – which itself has covered ground emissions from the likes of power stations and industry since 2005.

Amapola Green Air Mail - is the environmental work that we do together with the Nordic Post, which has ambitious targets to reduce CO2 by 40% throughout the group until 2020. As part of this effort, Amapola implemented activities to reduce fuel consumption which in turn leads to reduced emissions. During the first 12 months in 2012-2013, we reduced fuel consumption by 10.4% and CO2 emissions by 948 tons.

That was managed by: Flying slower and select the correct altitude where the winds are favorable, optimum flight paths, active fuel planning and well-motivated pilots.

Today we often land before the scheduled time when we usually come away early from the station of departure. Rather than arrive early, we will use the time in the air as fuel efficient as possible.

" Postal Technology International Award 2013 - Environmental Achievement of the Year" . Nordic Post received in October 2013 a reward of a successful environmental work when they won first prize in the category "Best environmental achievement” on a Postal worldwide exhibition in Vienna. The example that Nordic Post highlighted in his presentation was this environmental cooperation with Amapola.